Relive the Grand Final on Twitch!

The 2022 Ferrari Velas Esports Series came to a thrilling conclusion in Italy on October 2nd, as the six regional finalists put on a sensational show in front of the cameras for the final time this year.

At the conclusion of an action packed day of activity, it would be British driver Jonathan Riley who overcame the odds to become the 2022 Ferrari Velas Esports Series champion, taking victory across the four unique challenges laid out by the organizers, and impressing the judging panel with both his performances and demeanour over the course of the Grand Final activations. 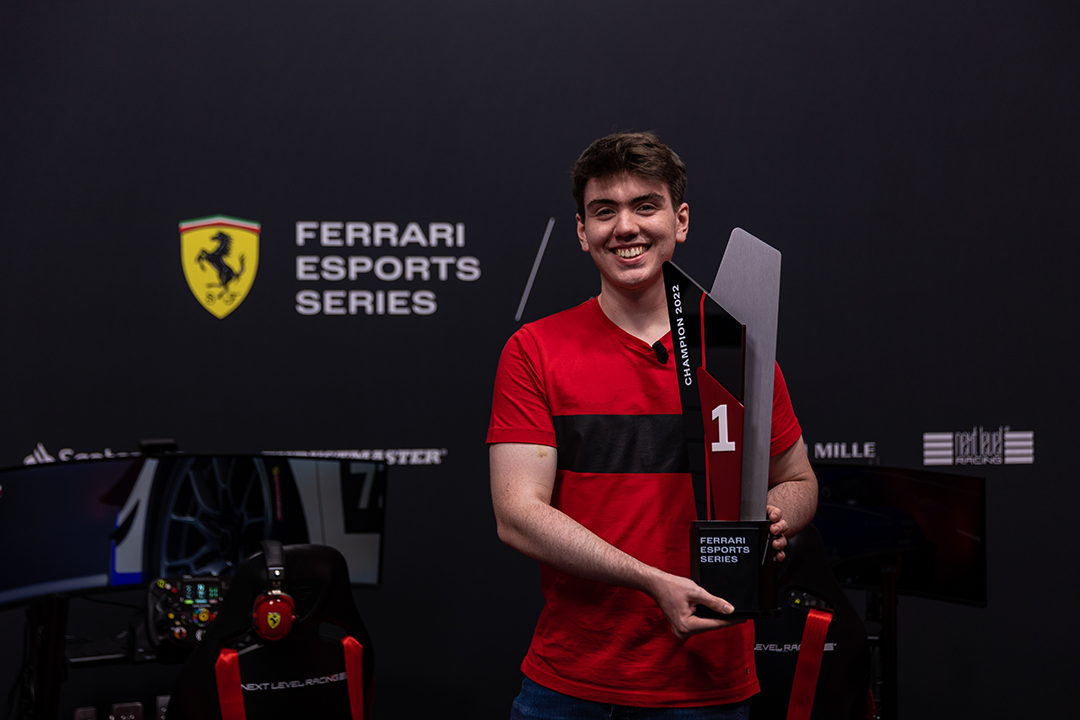 Held at the Ferrari Esports Studio in Italy, three drivers from North America, and three from Europe were treated to an immersive few days of Ferrari activations ahead of the main showcase event. Having first visited the famed Ferrari Museum in Maranello, before being introduced to the Scuderia Ferrari Velas Esports team staff and headquarters within the Gestione Sportiva building at the main Ferrari facility, the full Ferrari experience was laid out before the six racing prospects ahead of the track action commencement within the esport studio on Sunday evening.Differing significantly from previous Ferrari Esports formats of seasons past, the Ferrari Velas Esports Series Grand Final would be a full day of challenges and activations for the six aspiring esports stars. Beginning with a lap time challenge in the Ferrari 488 GT3 Evo at the Indianapolis Grand Prix course in Assetto Corsa Competizione, the official simulation software developed by Kunos Simulazioni and selected by Ferrari for its Esports Series, drivers were set with the task of scoring the ultimate lap time against their rivals, in a 15 minute timed session.

With limited track time and in unfamiliar equipment, Riley would be the first to make his mark in the series, setting the top lap time ahead of Mérick Lévêque, with Christopher Severt following on closely in third. Giving the drivers little in the way of rest, the second challenge of the day would be perhaps the most difficult one of all, as rather than focussing on outright pace, the drivers would be tasked with running a five lap stint at Circuit of the Americas in the 488 Challenge Evo, as they attempt to hold a consistent lap time to the given time of 2.11.08 – set by Ferrari Esports driver Danilo Santoro. For this task, the main goal would be consistency and the ability to drive within a given time, two key aspects of a successful endurance and GT racing driver.Initial points leader Riley would have a difficult session at COTA, coming home only fifth after a disappointing session, with Italian driver Michael Romagnoli taking top honours, ahead of Lévêque and Severt as they continued their consistent start to the campaign. 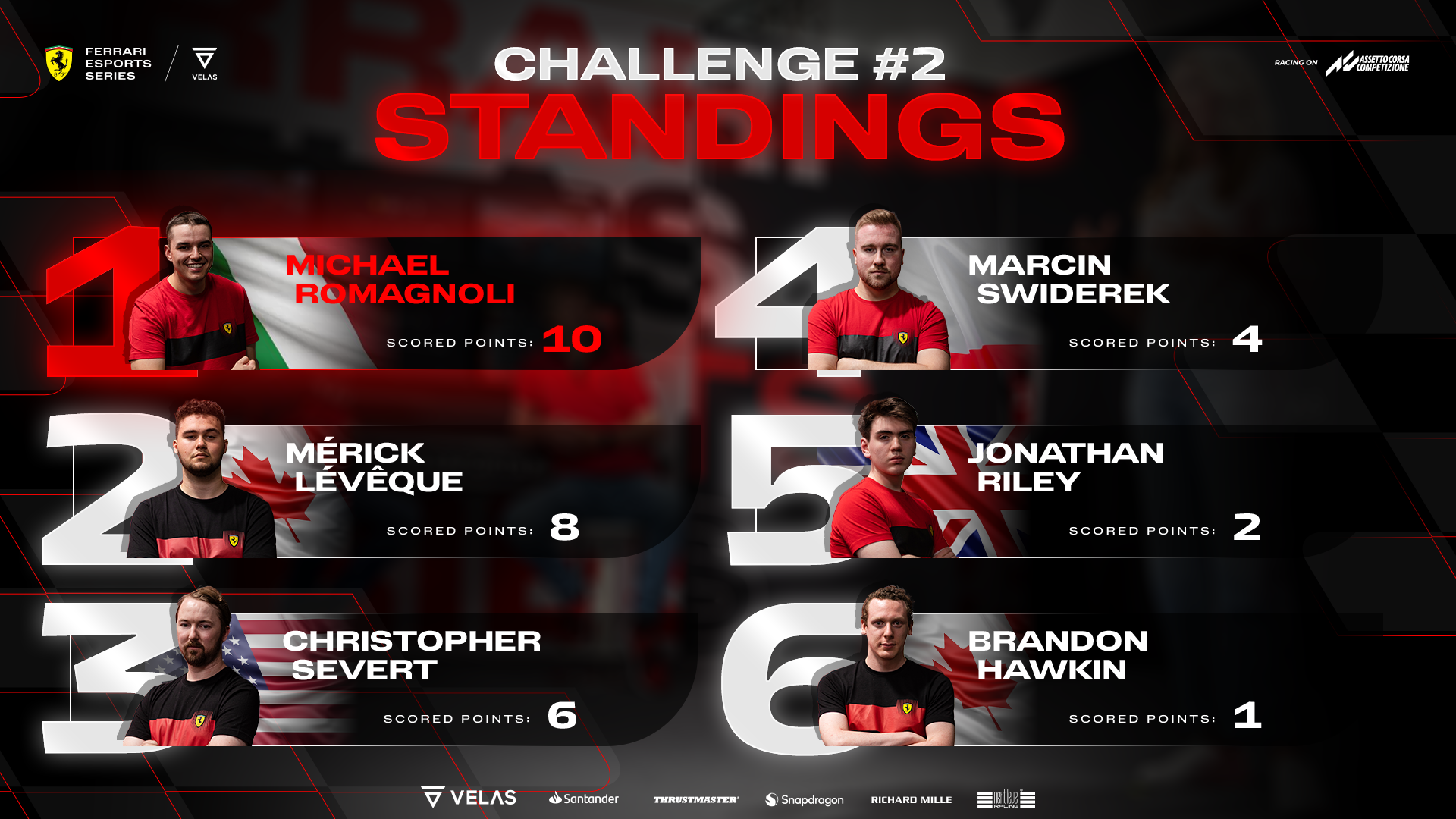 For challenge three, the drivers would be a little closer to their comfort zone with a traditional race event taking place at the Nürburgring Grand Prix Circuit, however, the main difference for this session would be the weather conditions, as the Ferrari team looked to assess how the drivers cope in a wet race set of conditions.
Run to a 30 minute time limit following an off camera qualification session, the third challenge would prove a strong test of adaptability and racing under pressure for the six finalists, with Severt proving more than up to the task in hand with a runaway victory ahead of Riley in second, with fellow North American Lévêque dropping a position to the final step of the podium placings. The final test of the night would be another race scenario, however as the drivers migrated to the 488 Challenge Evo, for this last test of their racing prowess the Grand Final would see not one, but two 30 minute races at the Imola Grand Prix Circuit, with the second of the two events being a reverse grid night race.The opening track action would prove to be a robust affair, won by Riley ahead of Severt and Lévêque, however the real drama would be saved up for the very last challenge of the evening. With the need to work their way through the field thanks to the reverse grid formation, Riley, Severt and Lévêque, with the aid of some sensational defending from Brandon Hawkin, put on a fantastic show for the audience at home – holding their own under immense pressure and racing doorhandle to doorhandle for much of the event, before Riley eventually managed to find a way through the drama to catch a late race lead and victory, with it taking a maximum points haul and the overall points standings victory of the day.
Despite coming out on top of the four challenges, the six Ferrari Velas Esports Series finalists still had one final obstacle to overcome, as the judging team of Tiziana Mecozzi (Scuderia Ferrari Esports Manager) Arthur Leclerc (FIA F3 Driver) and Kamil Pawlowski (2021 Ferrari Esports Champion) had to allocate their 30 additional points to the racing field. In a tense final prize giving ceremony, it would be Jonathan Riley who came out as the overall Grand Final and Ferrari Velas Esports Series 2022 winner, beating off still competition from Christopher Severt in second, with Michael Romagnoli taking third from Mérick Lévêque, Marcin Swiderek and Brandon Hawkin rounding out the end of season finalists positions.As the newly crowned champion, Jonathan Riley now has the opportunity to join the Scuderia Ferrari Velas Esports Team, and become a professional esports racing drive -, but with only a short few months between now and the commencement of our new racing season, the story has only just begun.

Velas is currently the fastest blockchain with Ethereum VM compatibility and was founded in 2019 in Zug, Switzerland. Velas is also one of the most efficient blockchain networks for secure, interoperable, extremely scalable transactions and smart contracts that is integrating world-changing technology products and services with the aim of improving people’s lives all over the globe. Velas is creating an innovative environment for decentralized applications, social platforms, open finance, access management solutions, Web 3.0 DeFi apps, micro-apps, and more.

Providing over 75,000 transactions per second with extremely low fees, Velas is one of the most efficient blockchain networks available. Being an ecosystem using a wide range of decentralized products and services, the main goal of Velas is to bring blockchain technology to all types of users, from micro-startups to enterprise divisions while undergoing active efforts of being certified as a Climate Neutral blockchain and aiming to be a fully distributed Space network by 2025.

Banco Santander (SAN SM, STD US, BNC LN) is a leading retail and commercial bank, founded in 1857 and headquartered in Spain. It has a meaningful presence in 10 core markets in the Europe, North America, and South America regions, and is one of the largest banks in the world by market capitalization. Its purpose is to help people and businesses prosper in a simple, personal and fair way.

Santander is building a more responsible bank and has made a number of commitments to support this objective, including raising over €120 billion in green financing between 2019 and 2025, as well as financially empowering more than 10 million people over the same period. At the end of 2021, Banco Santander had €1.15 trillion in total funds, 153 million customers, of which 25.4 million are loyal and 47.4 million are digital, 9,900 branches, and 197,000 employees.

Qualcomm invents breakthrough technologies that transform how the world connects, computes, and communicates. When we connected the phone to the Internet, the mobile revolution was born.  Today, our inventions are the foundation for life-changing products, experiences, and industries.  As we lead the world to 5G, we envision this next big change in cellular technology spurring a new era of intelligent, connected devices and enabling new opportunities in connected cars, remote delivery of health care services, and the IoT – including smart cities, smart homes, and wearables.

Qualcomm Incorporated includes our licensing business, QTL, and the vast majority of our patent portfolio. Qualcomm Technologies, Inc., a subsidiary of Qualcomm Incorporated, operates, along with its subsidiaries, substantially all of our engineering, research and development functions, and substantially all of our products and services businesses, including our QCT semiconductor business.
For more information, visit Qualcomm’s website, OnQ blog, Twitter, and Facebook pages.

Founded in 2001, RICHARD MILLE quickly established itself as one of the pre-eminent players within the watchmaking industry, developing a unique, immediately recognizable architectural aesthetic.

RICHARD MILLE’S success is a product of three crucial elements: the best of cutting-edge innovative technology, a strong, imaginative artistic and architectural dimension, and watches designed to be resistant and ergonomic.

The Brand endeavours to apply the techniques and materials found in the most innovative sectors such as in the domains of F1 racing car development and the aerospace industry to watchmaking, with the goal of creating extreme timepieces, without gimmicks, and extend the field of horological knowledge and invention.

Kunos Simulazioni is a software house specialized in developing driving simulations for the videogame market and professional applications. The company launched in 2005 as a one-man show, and now involves professional expertise capable of producing the technology required to satisfy a diverse range of requirements: from professional training software for car manufacturers and racing teams to advanced video games dedicated to sim racers looking for a driving model with maximum realism.

The “Assetto Corsa” racing game is the best result of this vision, turning a driving simulation into one of the most recognized and popular brands of racing videogames, a benchmark in terms of car handling, visual realism, and track accuracy. www.assettocorsa.net