The next stage of the Ferrari Velas Esport Series begins today, Grand Finals Set for October.

The 2022 season of the Ferrari Velas Esports Series is about to head into a pivotal stage of the competition, as the latest edition of the acclaimed virtual motorsport championship charges into the final stretch of intensive competitive activity. Today at 3PM EDT/ 9PM CEST, drivers of the European element of the series will take to virtual recreations of the Circuit de Barcelona-Catalunya, Circuit of the Americas, Spa-Francorchamps and the Indianapolis Grand Prix circuit to do battle for the opportunity to participate in the next stage of the championship, and with it, the chance to progress to a winner takes all on-site Grand Final in Italy.

For both drivers and fans of the Ferrari Velas Esports Series, the second qualification show holds significant additional interest thanks to the introduction of two greatly anticipated new circuits, as the series looks to leverage the highly regarded Circuit of the Americas and Indianapolis Grand Prix road course venues that have recently been deployed to Assetto Corsa Competizione, one of two simulation platforms developed by Kunos Simulazioni and used within the 2022 running of the championship. Adding Assetto Corsa Competizione alongside the previously utilized Assetto Corsa software has proven to be an inspired choice for this current campaign, garnering significant positive feedback from both participants and new and existing fans of the series. 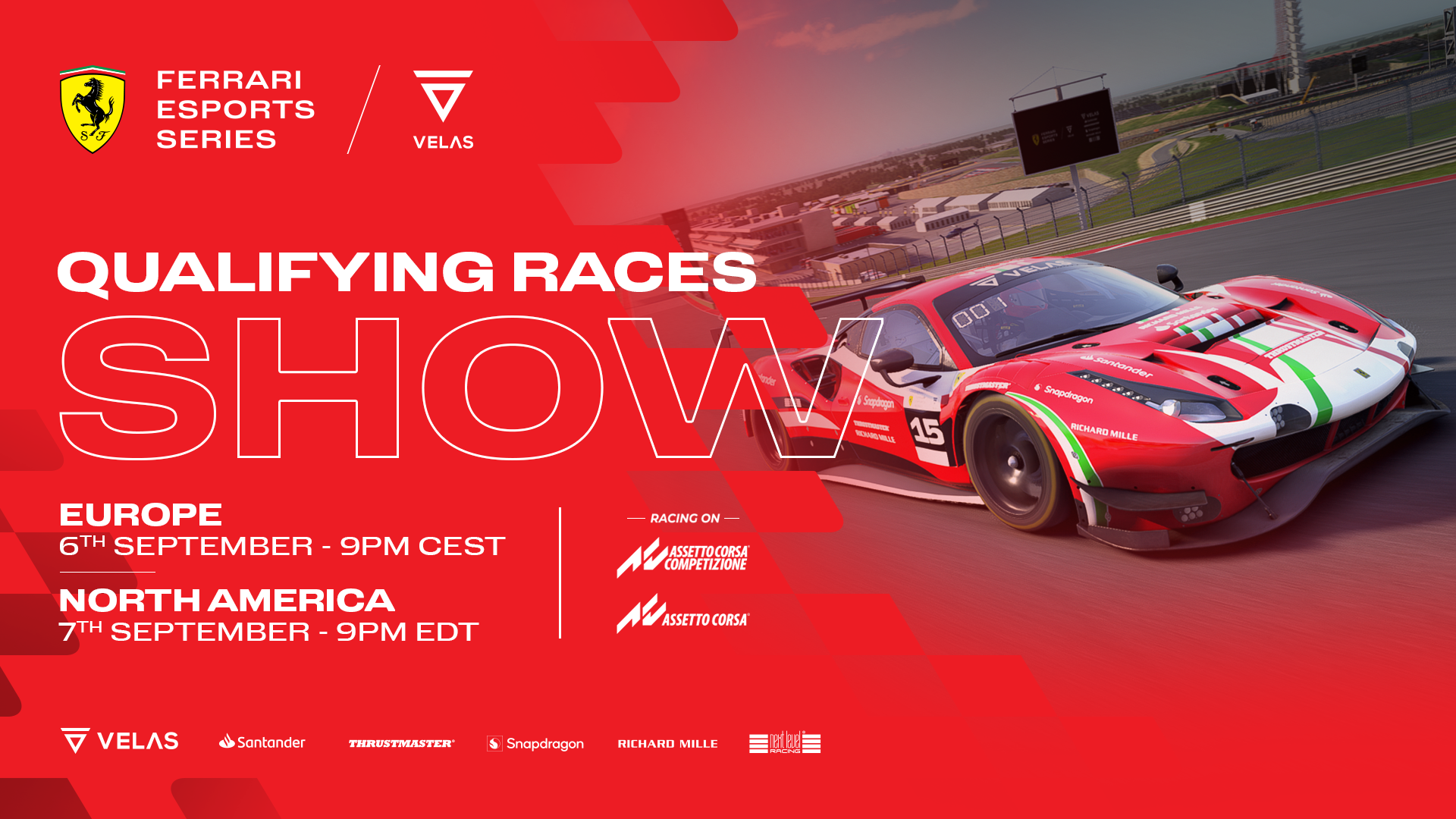 Watch the Qualifiers live on Twitch!

Following the European show, on Wednesday, September 7th at 9:00PM EDT/3AM CEST, the Ferrari Velas Esports Series will air the next installment of the North American qualification race show, a new initiative developed for the 2022 racing season.

Similar in format to the proceeding European broadcast, the North American program will feature another star of the Ferrari Driver Academy, as Formula Regional European Championship leader Dino Beganovic joins hosts Amanda Busick and Paul Jeffrey in the Ferrari Esports Studio in Italy. Following the same format of four independent races across four unique and laser scanned circuits within both Assetto Corsa and Assetto Corsa Competizione, this broadcast will present the final opportunity for North American drivers to secure a place in their own Regional Final event ahead of the combined, on-site Grand Final show. Throughout the course of this qualification race broadcast, both European and North American drivers will utilize the stunning Ferrari 488 GT3 Evo 2020 and Ferrari 488 Challenge Evo cars.

As has become traditional within the Ferrari Velas Esports Series, the Scuderia Ferrari Formula One team will be represented during both European and North American broadcasts, with an exclusive interview from Monégasque driver Charles Leclerc hosted by Paul Jeffrey (European show) and Amanda Busick (North American show) set to form an undoubted highlight of the evening.

At the conclusion of each respective broadcast, only the very best virtual drivers will have earned the right to qualify for the next stage of the competition – the Regional Finals – set to take place on September 13th at 9PM CEST/3PM EDT for Europe, and the day after, September 14th at 21:00 EDT for North America. The Regional Finals will see the top 24 qualified drivers from each region compete across both the Assetto Corsa and Assetto Corsa Competizione simulation platforms for an opportunity to earn a shot at racing in the Grand Final – set to be broadcast on Sunday 2nd October at 9PM CEST/3PM EDT.

The regional finals’ tracks have already been chosen: for the European races Silverstone and Imola will take centre stage, whereas for North America both Laguna Seca and Watkins Glen are the venues of choice. Both Finals shows will feature further guest appearances from star names such as Charles Leclerc and Carlos Sainz, Ferrari F1 Drivers and Grand Prix winners. 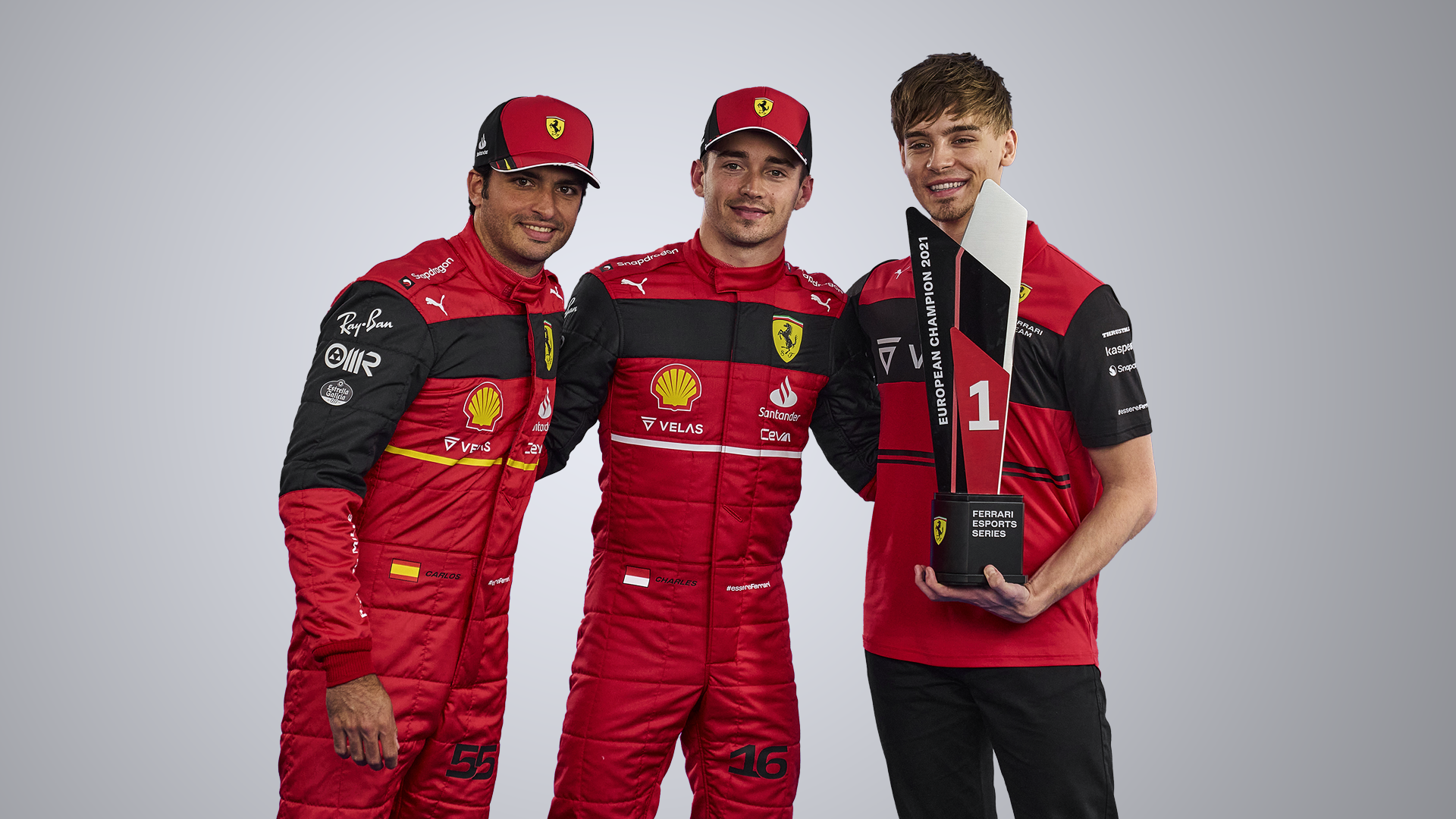 Live broadcasts for the Qualifying and Regional Final races can be followed on the Official Twitch channel, and will be presented by Nicki Shields for Europe, and Amanda Busick for North America with Paul Jeffrey as cohost.

All races will be streamed on the Ferrari Esports Twitch Channel https://www.twitch.tv/ferrariesports.

Banco Santander (SAN SM, STD US, BNC LN) is a leading retail and commercial bank, founded in 1857 and headquartered in Spain. It has a meaningful presence in 10 core markets in the Europe, North America and South America regions, and is one of the largest banks in the world by market capitalization. Its purpose is to help people and businesses prosper in a simple, personal and fair way.

Santander is building a more responsible bank and has made a number of commitments to support this objective, including raising over €120 billion in green financing between 2019 and 2025, as well as financially empowering more than 10 million people over the same period. At the end of 2021, Banco Santander had €1.15 trillion in total funds, 153 million customers, of which 25.4 million are loyal and 47.4 million are digital, 9,900 branches and 197,000 employees.

Qualcomm invents breakthrough technologies that transform how the world connects, computes and communicates. When we connected the phone to the Internet, the mobile revolution was born.  Today, our inventions are the foundation for life-changing products, experiences, and industries.  As we lead the world to 5G, we envision this next big change in cellular technology spurring a new era of intelligent, connected devices and enabling new opportunities in connected cars, remote delivery of health care services, and the IoT – including smart cities, smart homes and wearables.

Qualcomm Incorporated includes our licensing business, QTL, and the vast majority of our patent portfolio.  Qualcomm Technologies, Inc., a subsidiary of Qualcomm Incorporated, operates, along with its subsidiaries, substantially all of our engineering, research and development functions, and substantially all of our products and services businesses, including our QCT semiconductor business.
For more information, visit Qualcomm’s website, OnQ blog, Twitter and Facebook pages.

Founded in 2001, RICHARD MILLE quickly established itself as one of the pre-eminent players within the watchmaking industry, developing a unique, immediately recognizable architectural aesthetic.
RICHARD MILLE’S success is a product of three crucial elements: the best of cutting-edge innovative technology, a strong, imaginative artistic and architectural dimension, and watches designed to be resistant and ergonomic.

The Brand endeavoures to apply the techniques and materials found in the most innovative sectors such as in the domains of F1 racing car development and the aerospace industry to watchmaking, with the goal of creating extreme timepieces, without gimmicks, and extend the field of horological knowledge and invention.

Kunos Simulazioni is a software house specialized in developing driving simulations for the videogame market and professional applications. The company launched in 2005 as a one-man show, and now involves professional expertise capable of producing the technology required to satisfy a diverse range of requirements: from professional training software for car manufacturers and racing teams to advanced videogames dedicated to simracers looking for a driving model with maximum realism.

The “Assetto Corsa” racing game is the best result of this vision, turning a driving simulation into one of the most recognized and popular brands of racing videogames, a benchmark in terms of car handling, visual realism and track accuracy. www.assettocorsa.net