Modiphius Entertainment is thrilled to announce a brand new range of tabletop games for its flagship IP “Against the God Themselves”: COHORS CTHULHU. This new cinematic tabletop RPG, narrative co-operative wargame, fiction line, and miniatures range is set in the same universe as the successful Achtung! Cthulhu 2D20 RPG, and expands upon it, this time introducing adventurers to an era of daring gladiators, valiant centurions, and brave Germanic heroes.

“The object of life is not to be on the side of the majority, but to escape finding oneself in the ranks of the insane.”
— Marcus Aurelius (Roman Emperor A.D. 161-180 A.D)
COHORS CTHULHU details a secret war being fought on the fringes of the Roman Empire. Far up on the Northern border, Romans and Germanic tribes clash in the dark and forbidden forests that cover these lands. Soon, however, they’ll have to band together to stem the invading forces of an insidious cult and its swarm of abhorrent creatures from the deep cosmos. Modiphius has assembled a rockstar creative team led by Modiphius’ Chief Creative Officer Chris Birch, including Lead Writer Douglas Seacat (Warmachine, Hordes, Iron Kingdoms RPG), RPG Lead Writer Matt Goetz (Iron Kingdoms RPG, Pathfinder, Dungeons & Dragons 4th Edition), authors John Houlihan (Achtung Cthulhu, Mon Dieu Cthulhu, The Seraph Chronicles) and Nick Brown (Agents of Rome), Modiphius 2d20 Developer Nathan Dowdell(Star Trek Adventures, Dune: Adventures in the Imperium, Fallout 2d20), and artists including Bjorn Barends (John Carter, Marvel Comics, DC Comics, Image Comics) and Phroilan Gardner (Conan, Diablo III, League of Legends, World of Warcraft). 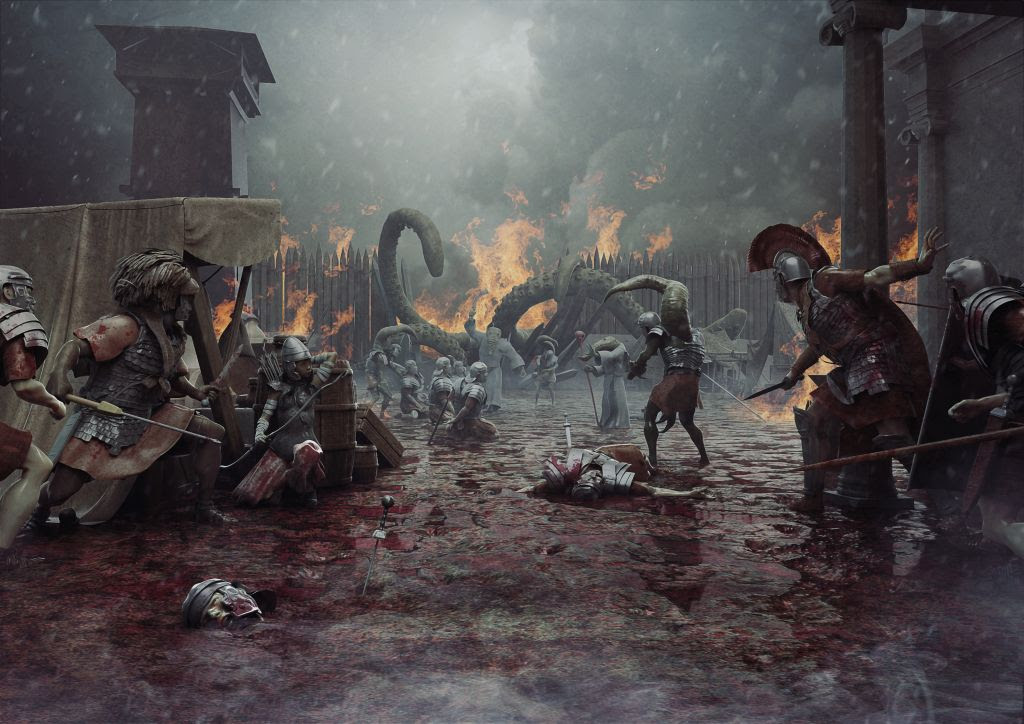 COHORS CTHULHU puts players on the front lines of the known world in the 2nd century, using fire, steel, and ancient technology to fight Eldritch horrors! “We always envisioned Achtung! Cthulhu as part of a larger storyline where heroes across the ages fight a secret war against the eldritch forces of the old gods,” said Chris Birch, co-founder at Modiphius Entertainment. “COHORS CTHULHU is the next step in bringing that universe to life and opening up more possibilities for players to create and play in amazing stories that span human history. Working on this project has let us massively expand the universe and we’ve delved deep into the mystical ancient records of the Hyperboreans, the strange technologies of Atlantis and the road to the mighty Roman Empire! In the Shadows of Atlantis campaign for Achtung! Cthulhu we teased a connection to Atlantis, and in The Mountains of Madness, we promised an epic sequel that showed what would happen at the end of World War Two if the Nazis finally woke the sleeping gods. We have always planned to build this world out, and now we can.”The first major release for the COHORS CTHULHU roleplaying game will drop players into the Roman frontier town of Laurium, the archetypal walled fort that sits on the border between civilization and the mysterious, foreboding lands. Smoky taverns filled with dangerous vagabonds swirl with gossip and whispers of terrifying creatures, strange ruins, and haunted forests in 2nd century Northern Europe. Barbaric Germanic tribesmen prowl the thick woodland, but are they the only thing the Romans should be worried about? And how do these events relate to ancient Atlantis and the colossal war that would tear Europe apart two millennia in the future?

Modiphius Entertainment has multiple projects planned for this universe, including:

COHORS CTHULHU’s adventures encompass many different cultures across the Roman world. Modiphius is inviting diverse writers to contact them to join the creative team and help bring the many parts of the Roman empire and the cultures beyond its borders to life. Please contact moc.s1656467114uihpi1656467114dom@t1656467114roppu1656467114s1656467114with your RPG writing CV. You should have some working knowledge of the Roman era and the culture you’re interested in.

A full press kit, including logo, screenshots, and key art can be found here: https://uberstrategist.link/COHORS-Cthulhu-PressKit.

Modiphius is a British entertainment publisher working with global creative talent to develop unique creative properties. ​We publish roleplaying games, boardgames, miniatures, novels, cool accessories, and more. Our aim is to inspire those who read, play, or encounter our work with tales of heroism, adventure, and courage.