Created in collaboration between Hollywood and game industry veterans, The Atlas Mystery marries the two art forms through the lens of VR to immerse players in a detailed and captivating world inspired by classic cinema and adventure puzzle games like Myst. The Atlas Mystery combines challenging escape room style puzzles with a riveting investigative narrative full of shocking twists and haunting revelations, plunging players into a thrilling supernatural murder mystery. Players take on the role of the theater’s new floor manager and must solve a series of increasingly peculiar puzzles to ultimately uncover the twisted truth behind the infamous theater. “I’m thrilled to open the doors to the Atlas Theater and invite players to immerse themselves in an atmospheric and detailed world inspired by my love of classic cinema,” said Eric Kleifield, the game’s writer and co-producer. “We challenged ourselves to build a full-scale movie palace stocked with rich mythology and hours of gameplay. Every object and every puzzle you discover weaves itself into an intricate murder mystery that should leave puzzle and escape room fans very happy.”

The Atlas Mystery is the result of a partnership between Welcome Villain Films’ Head of Creative, Eric Kleifield, and Top Right Corner, who previously joined forces on the highly-rated game Belko VR: An Escape Room Experiment — which was created in partnership with MGM and BH Tilt to promote James Gunn’s 2017 film, The Belko Experiment. Belko VR has received over 165k downloads on Steam since release, along with an “overwhelmingly positive” review ranking. The Atlas Mystery is a fleshed out spiritual successor to the title.

“As someone with both a background in producing films and making games, The Atlas Mystery was such a blast for me and the Top Right Corner team to create. Filled with dozens of puzzles and a classic Hollywood mystery to unwind, Atlas will appeal to VR enthusiasts hoping to disappear behind the silver screen,” said Dan Clifton, founder of Top Right Corner. 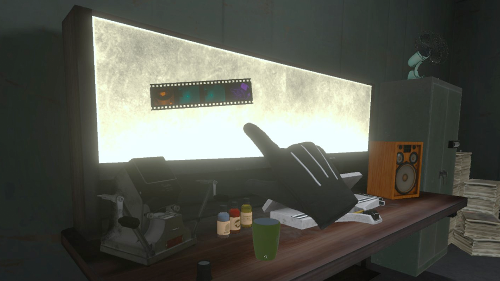 The Atlas Mystery’s soundtrack is a major part of the game’s cinematic authenticity and was composed by Hollywood talents Evan Goldman (additional composer on The Falcon and the Winter Soldier, Detective Pikachu) and Chris Ryan (orchestrator on Shazam!). The Atlas Mystery Original Soundtrack will release next week on Steam and additional audio streaming platforms.

The Atlas Mystery is available now for $14.99 via Steam, with support for the HTC Vive, Oculus Rift, and Valve Index, and for the Meta Quest via SideQuest, and Viveport. Fans who purchase the game on Steam can take advantage of a 10% off launch week discount.

Founded by film producer and technologist Dan Clifton, Top Right Corner is a leading creator in solutions for clients in Entertainment, Government, Education and other private sector groups. the XR (extended reality) space, producing original gaming content along with cutting-edge tech You can find out more at toprightcorner.com.

Eric Kleifield is a creative executive with vast experience across numerous entertainment mediums. His past gaming experience includes Belko VR, Child’s Play VR, Bill and Ted Face the Music VR, and more. Kleifield previously worked in creative marketing at studios such as Blumhouse Productions and Orion Pictures, and is currently co-founder and Head of Creative for Welcome Villain, a newly-announced genre film studio in partnership with Top Right Corner.